One Giant Leap for Silicon 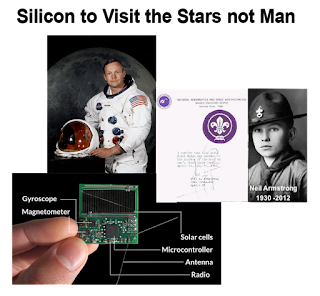 Scientists dubbed them, "Sprites". But, they are nothing close to the lemon-line soft drink.

No, a Sprite is a tiny spacecraft on a microchip... 3.5 centimeters square and weighing four grams... and packing all the necessary tools to survive a very long distance space flight: "a solar panel, radio, thermometer, magnetometer for compass capabilities and gyroscope for sensing rotation".

So, when a Sprite enters the Alpha Centauri system, I guess, our ancestors won't be hearing,"That's one small step for man, one giant leap for mankind."

It will be, "One small step for a micro spacecraft. One giant leap for silicon."

Still, I'll bet that Sprite won't be totin' its World Scout Badge like Eagle Scout Neil Armstrong took with him to the Moon.

"Spacecraft have gone bite-sized. On June 23, Breakthrough Starshot, an initiative to send spacecraft to another star system, launched half a dozen probes called Sprites to test how their electronics fare in outer space. Each Sprite, built on a single circuit board, is a prototype of the tiny spacecraft that Starshot scientists intend to send to Alpha Centauri, the trio of stars closest to the sun. Those far-flung probes would be the smallest working spacecraft yet.

"'We’re talking about launching things that are a thousand times lighter than any previous spacecraft,' says Avi Loeb, an astrophysicist at Harvard University who is part of the committee advising the initiative. A Sprite is only 3.5 centimeters square and weighs four grams, but packs a solar panel, radio, thermometer, magnetometer for compass capabilities and gyroscope for sensing rotation."

"These spacecraft are designed to fly solo, but for this test, they hitched a ride into low Earth orbit on satellites named Max Valier and Venta-1. Each satellite has one Sprite permanently riding sidecar, and the Max Valier craft has another four it could fling out into space. Unfortunately, as of August 10, ground controllers haven’t yet been able to reach the Max Valier satellite to send a “'Release the Sprites!'” command. One of the permanently attached Sprites — probably the one on Venta-1 — is in radio contact."

"Before sending next-gen Sprites off to Alpha Centauri, scientists plan to equip them with cameras, actuators for steering and other tools. 'This was really just the first step in a long journey for Starshot,' Loeb says."