Pee in my Helmet 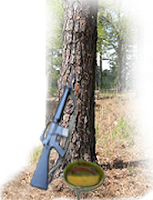 It was dark — very dark — and, hot, sticky and very buggy.
But then, was always that way. That night was especially hot, sticky and buggy. Maybe because we all were soaked with sweat and drenched in disgusting swamp rain.

Still, as soon as we got the word that we could set up “shelters” for the night, 90% of my platoon disappeared. I remember the sergeant saying, “Now you boys stay away from those snakes and gators. Just let them be… and Baker you and Jacobs stand guard first.”

Next thing, Jacobs and I were standing alone as most of the platoon disappeared looking for reptiles and other swamp things.

I remembered thinking: It is pitch-dark and I can’t see my hand in front of my face. Snakes and gators, you have got to be kidding! I’m leaning against this tree for a while — where it’s safe — and not the least interested in sloggin’ about in the muck lookin’ for crocodiles and other slimy things.

While the rest of our company was sacking out, another unlucky guy and I were supposed to stay awake, watch for bad guys sneakin’ up on us in the early morning murk. We were dog-tired after our 20-mile forced march from nowhere to nowhere. It was near the end of our training cycle at the Tigerland part of We had to endure the forced march to prove to somebody that we were all ready to travel to our next vacation location; .

Later that night Jacobs and I were relieved from guard duty and allowed to set up our shelter and get some rest. I leaned my M16 on a convenient tree and put my helmet down next to it so I could find them in the dark. Jacobs announced that he needed to relive himself and walked a few feet away to complete the chore. Paying no attention to which direction he’d wandered off to, I completed my work and retrieved my rifle and helmet.

I put the helmet back on my head and instantly suspected something was different as the smell of urine filled my nostrils and warm fluid covered my face and ears.

A college graduate with two years as a night orderly for my hometown hospital, it dawned on me that Jacobs had managed to miss-target all of but direct-hit my helmet. It was an amazing accomplishment, given the darkness and the fact that he could hardly see in the daylight.

I’m not a violent person, but that night I was empowered by the gods of urine to find Jacobs and let him know how it felt to have a urine bath. However, our sergeant intervened, he held me down and drained his canteen over my head. He didn’t let me go until my normal, docile personality returned.

Jacobs, returned, too — when it was obviously safe — and my military colleagues’ laughter had subsided.

(Editorial note: Jacobs and I were friends before the “incident” and became even closer friends later on.)

Tigerland
Tigerland was the name of a U.S. Army training facility during the mid-'60s to early '70s located at . as part of the U.S. Army Advanced Infantry Training Center. Tigerland was “often the last stop for new infantrymen on their way to ”. The Army chose as the location for Tigerland because the “environmental conditions are similar to (That is, absolutely miserable. - RB) Tigerland, the film, is “loosely based on this training camp”.