How are Your Tools?

There was a little girl named Aaina who was seven years old. She lived with her parents and three brothers on a sheep ranch about one hundred miles from Melbourne, Australia. She liked to play with the baby lambs. If the mother sheep had trouble nursing the lamb, Aaina would feed them with a bottle and nipple. Sometimes Aaina would braid long grasses and make a nice hat for the baby lamb.

Aaina’s ranch was hundreds of acres. Sometimes her brothers would shepherd the sheep just like Moses from the Bible. They had to get grasses to eat. Australia is a dry continent and does not get a lot of rain.  The brothers would bring the sheep back at night for water and for safety. There are wild dogs in the Outback who are always looking for a nice meal. 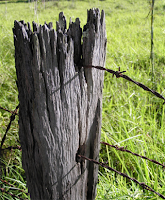 Aaina’s oldest brother Malcolm was told by his father that his job was to keep all of the fences mended. Malcolm did not like to work. He was more interested in playing footie (football) with his mates (friends). Sometimes he would hurry with his work so he could meet his mates at the hotel (tavern) and have a few beers.

One night the sheep got out through a hole in the fence. Aaina’s father was very upset with Malcolm. “How did the sheep get out, you are supposed to keep the fences mended, what happened?” Malcolm said that his fence mending tools were old and starting to rust and that must have been the problem. He blamed poor tools on his poor and hurried work.

O.K., I know most of us don't literally mend fences and don't have the tools mentioned above. But, we all use tools - computer skills, software, etc. Perhaps, it's time to checkout the most recent version... clean off the "rust" and discover that you can really shine. - RB