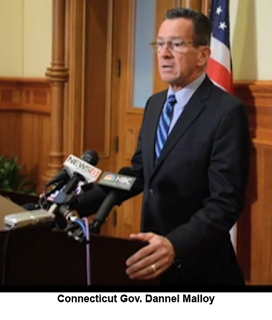 The other day Gov. Mallory reminded me why I'm proud of my country. It's when heroes like him display the courage to walk the path which our ancestors walked. That is ... the American Way... because it is the right way... the humanitarian way.

Toward the end of Gov. Dannel Malloy's press conference, when he announced that Connecticut would take a Syrian refugee family that was rejected from Indiana, he said:

"The attackers in Paris were from two countries. This is my own observation. They were from France and from Belgium. No governor, no member of Congress, no member of the Senate, no leader of Congress has said we should stop allowing people France or Belgium from coming into our country. Nobody."

Below is the editorial which appeared in the Hartford Courant.

"France — despite everything — still plans to take in 30,000 Syrian refugees in the next two years. The least the Home of the Brave can do is take the 10,000 that President Barack Obama proposes, and Gov. Dannel P. Malloy is absolutely right to welcome them to Connecticut."

"Thus Connecticut became home Wednesday to a family of three from Syria who were turned away from Indiana after waiting for years in a refugee camp to settle in the U.S."

"The Paris attacks have evoked a mean-spirited and politically motivated reaction among some governors and presidential candidates against allowing any Syrian refugees into the country. Three dozen governors have said they don't want the refugees in their states, though the governors appear to have no legal authority to stop them from coming."

"The U.S. has a humanitarian obligation to help the millions fleeing death and destruction in a conflict this country was complicit in causing. We cannot wash our hands of the failed policies that gave rise to the Islamic State. And the vetting process is extremely rigorous; much more so than for, say, tourist visas. Of 23,000 refugees who applied to come to this country in 2014, only about 2,000 are here, Mr. Malloy said this week. Some of them fought with the U.S. against the Islamic State. How do you turn them away?"

"When this country succumbs to xenophobia, it does things it later regrets. Some Jewish refugees were turned away in the early 1940s, and Japanese-Americans on the West Coast were sent to internment camps, decisions that did not reflect our better nature."

"It is a dangerous world, beyond question, and we all must be vigilant. But rejecting refugees based on their country of origin is not American. If the get-tough governors are serious about reducing violence in this country, there's always sensible gun laws."