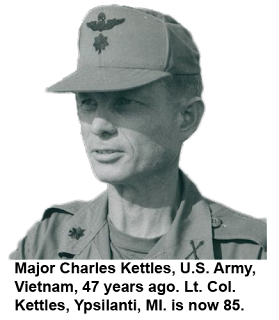 Today’s random act of kindness is a little different from those I’ve posted in the past. This one is about bravery under fire and extraordinary courage.

Forty-eight years ago a helicopter pilot and his crew put their lives on the line at Song Tra Cau, Vietnam to bring 44 U.S. Army comrades out of harm's way.

“Under heavy enemy fire, Major Kettles selflessly put his life on the line to save his fellow service members,” said Peters, a former lieutenant commander in the U.S. Navy Reserve. “(His) actions exemplified the valor, grit, and honor that makes our military the best in the world.”

Defense Secretary Ash Carter said that while Kettles’ actions entitled him to the Medal of Honor, by law, the medal can only be awarded within five years of the valorous act for which it is being awarded, unless Congress waives the time limit.

Go here for the whole story by Todd Spangler in the Detroit Free Press.