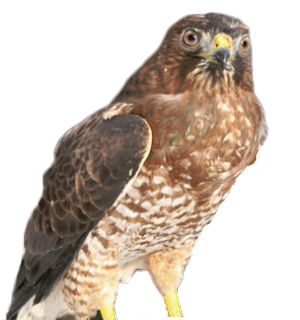 Early one morning before sun appeared to light the darkness, I walked a path into a beautiful glen.

I heard the mocking cries of crows as I approached closer. Then, out of the darkness, I saw a group of cages, each protecting wounded birds.

The occupant of one cage, the last one, was the subject of the crows’ vengeance. Several were standing atop the cage while others were flying near by — all screaming mocking calls.

As I grew closer the crows flew off.

In the sudden quite I approached the cage, at first seeing nothing inside. Then something moved and I caught a glimpse of white and brown as hawk slowly moved toward me.

I spoke to hawk and asked her why the crows were harassing her — crows outside — hawk defenseless and imprisoned.

She gave me no answer as we stood together in the early morning quiet… me, a defender and her, a prisoner.

I asked her again for the crows’ ire. Again she gave no response; but then she slowly turned on her perch, revealing that she had but one wing.

Some time later I emerged from a Native American Sweat Lodge. In near exhaustion I made my way home, collapsing into a deep sleep next to my bed.

I dreamed I was walking a path high in the mountains in the southwest desert. I was fearful that I would make a misstep and plunge into the deep abyss below.

Hawk came to me, there in my moment of doubt. She had grown her wing back and landed next to me. Looking deep into my soul she told me not to fear, take my next step and stay my path.

All will be right.

To this day hawk is with me. At times she comes to me in my dreams, filling me with her wisdom and strength. At times of decision making I look for her, knowing she will be there, somewhere close by – her, a defender and me, no longer a prisoner of my fears.