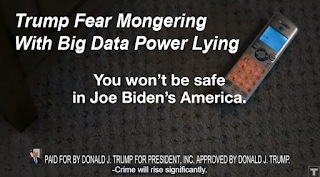 Perhaps you’ve seen the Trump re-election commercial featuring an older lady calling 911 while a bad man is breaking into her home. She is frantically calling 911 only to be told to leave a message. Someone will call her back the recorded message says, just as the bad guy apparently grabs her and she drops the phone. Next, an announcer declares: "you won't be safe in Joe Biden's America".

This ad sparked something in my mind from the Trump 2016 campaign. Please see: https://downriverusa.blogspot.com/2017/02/about-that-big-data-stuff.html.

Just as I thought.

Surprise! Cambridge Analytica is not dead after all. No, the undead former Cambridge Analytica employees are now back from the grave, living in the Trump re-election campaign, reprising their previously successful strategy, once again sowing Trumpian lies and fear mongering, trying to pump fresh blood into the Trump/Republican campaign, using “Big Data” lying techniques.

Certainly, Trump believers are ripe and more than willing to be won over by these misinformation and outright fabrication tactics.

But will those social media, micro-targeted voters be won over by the fear mongering, lying too? Or will Americans put aside the lies and their own fears, put two and two together, and realize who is trying to snooker them once again?

I guess we will see come November.

Here are the facts:
"Facts First: Biden has not proposed anything that could result in 911 calls no longer being answered. He has repeatedly and explicitly opposed the idea of "defunding the police," and he has proposed a $300 million increase in federal funding for community policing. Biden has not specifically weighed in on a proposal for a 50% cut to Seattle's police budget, which the ad insinuates he supports."

"The words "you won't be safe in Joe Biden's America" come on screen as the intruder confronts the woman. The phone falls to the ground."

About those "Big Data" zombies on the Trump reelection staff:
"Trump’s campaign strategists linked to a company hoovering up data on religious people..."

"But in an earlier phone conversation, in July, Moura channelled Nix in describing the power of personality-based targeting. When asked to give an example of such targeting, Moura suggested pro-gun communication. A traditional person could be targeted with messages about a grandfather teaching subsequent generations to hunt, while a more neurotic type would respond to messages highlighting the threat of a break-in, he said. Nix gave the exact same scenario four minutes into his 2016 presentation."