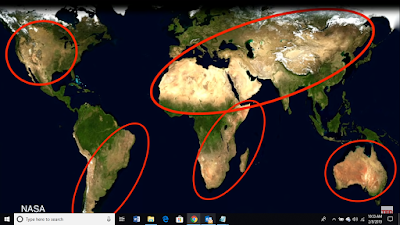 It’s time to Man Up, do the right thing, and restore our earth for ourselves and generations to come.

It is possible to accomplish the task, but we must take the first steps on the restoration path today.

“This model is the first to achieve the required negative emissions through natural climate solutions, including the restoration of degraded forests and other lands, along with a transition to 100% renewable energy by mid-century.”

"Citing a growing body of research, we show that using land restoration efforts to meet negative emissions requirements, along with a transition to 100% renewable energy by 2050, gives the world a good chance of staying below the 1.5°C target," Malte Meinshausen, founding director of the Climate and Energy College at the University of Melbourne and Potsdam Institute Fellow, says.

A transition to 100% renewables and the implementation of natural climate solutions offer additional benefits beyond keeping the climate system in check, the researchers say. The energy transition will be able to recycle our natural gas infrastructure and create millions of permanent jobs. Natural climate solutions could also dramatically increase sustainable livelihoods in the developing world, offering better water security and reduced soil erosion.

Facilitating the Regeneration of Grasslands

"Grasslands are vast landscapes that have the capacity, if properly managed, to address some of humanity’s most urgent challenges such as water and food insecurity, poverty, and climate change."

"One third of the earth's land surface is grasslands."

"70% of the world's grasslands have been degraded."

"Holistic Management of grasslands results in the the regeneration of soils, increased productivity and biological diversity, as well as economic and social well-being."

"Holistic Management uses decision-making and planning processes that give people the insights and management tools needed to work with the web of complexity that exists in nature: resulting in better, more informed decisions that balance key social, environmental, and financial considerations. In the context of the ecological restoration of grasslands worldwide, managers implement Holistic Planned Grazing to properly manage livestock – mimicking the predator/prey relationships in which these environments evolved."

Allan Savory, born in Zimbabwe and educated in South Africa (University of Natal, BS in Zoology and Botany) pursued an early career as a research biologist and game ranger in the British Colonial Service of what was then Northern Rhodesia (today Zambia) and later as a farmer and game rancher in Zimbabwe.

In the 1960s he made a significant breakthrough in understanding what was causing the degradation and desertification of the world’s grassland ecosystems and, as a resource management consultant, worked with numerous managers on four continents to develop sustainable solutions.

He served as a Member of Parliament in the latter days of Zimbabwe’s civil war and became the leader of the opposition to the ruling party headed by Ian Smith. Exiled in 1979 as a result of his opposition, he immigrated to the United States, where he continued to work with land managers through his consulting business.