It’s About Quality of Life 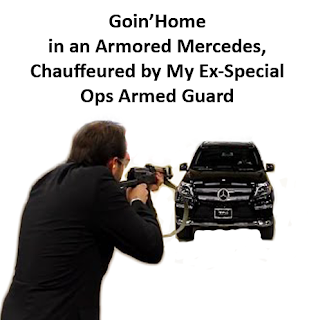 I’ll bet 10 cat’s eye marbles that there is one thing that you and I both know for certain.

That is American Predatory Capitalism is a clear failure for 99.9% of Americans. The U.S. has metastasized into a corporate oligarchy, dominated by a few billionaires, and is only a step or two away from becoming a full-blown Fascist dictatorship.

But the rest of us are struggling. We are barely eking out a living.

Importantly, it’s not just about money. It’s about quality of life.

After all, most of us don’t go home to protected, gated communities, riding in an armor-plated Mercedes, chauffeured by ex-Special Ops armed guard.

No, we’re living every second in a war zone of sorts. Just going somewhere – around the corner or cross town – requires remaining on guard, trying to avoid the people with the guns – the car rage people, totally insane and ready to explode for some perceived driving error – and the hoodlums ready to take your life for the $10 they think you might have in your wallet.

Today in America, you must now also be on guard to remain clear of and far away from those other people with guns – the police. Because if you are stopped for any reason, you may not survive the encounter. You can end up dead for making the wrong move or pulled out of your car are pummeled for God knows what the “bully-with-a-badge-and-gun” perceived as a provocative infraction.

Finally, we are forced to constantly remain on guard, alert for the next scam coming our way via those maddening, unsolicited phone calls, or the unending rip offs – from the cable company, the bank, the grocery store, the gas station, the insurance company, the doctor, the hospital, and without a doubt, the politicians.

No, American Predatory Capitalism is not working for 99.9% of Americans.

I’m for giving Nordic-Style Social Democracy some time at bat. It has worked for others. Let’s see what we can do with an Americanized version.

Let’s change our societal paradigm away from welfare for corporations and the .01%.

So, I’m for Bernie Sanders for President.

Yes, I’m in. Because I believe Sen. Sanders will move our nation toward an upgraded and improved quality of life… back toward the Democracy we thought we had… for all of us… all 99.9%.

The Nordic Theory of Everything: In Search of a Better Life by Anu Partanen