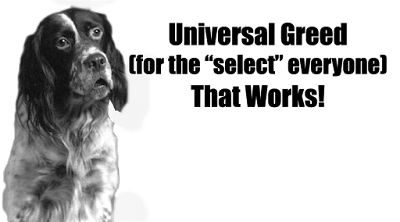 We know for certain that American-style capitalism does not work for most Americans. However, it certainly does work for the .01% and, arguably, even the top 10%, who earn roughly $120,000/yr and more.

For those people, life if very good. For the rest us, life is arduous, to say the least.

So, change is a must. Either capitalism is "revised" or... well, you know, things will get really bad for everyone.

We know change is never easy, so, here's a novel way to make the change happen: Why not emulate the best characteristic of the .01% class – the global corporatism, predatory capitalism people, the ones represented by the Republican Party – but scaled up for the American people en masse.

It is the “self-first” nature of the beast, the thing they do best.

But our “self-first” would be directed, if you will, away from boundless individual greed toward a huge dose of humanity-first, e.g. Nordic Democracy. That's the Social Democracy that is working in the Nordic countries, Denmark, Sweden, Norway and Finland.

Our goal is to selfishly see to the needs of every American, on a one-by-one, individual basis, making sure that we need and exceed those needs, by making our society, including our government and our corporations, meet every single desire, want, need, for each and every person, universally, regardless of their personal stature or wealth.

In fact, all we would be doing is emulating the .01% class, but making their lifestyle universal, for all of us. 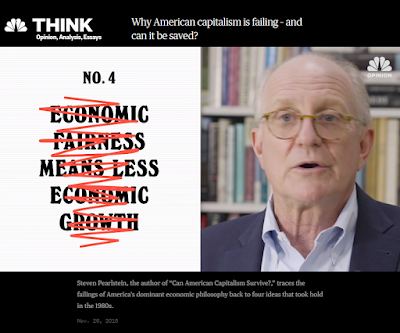 Steven Pearlstein, a columnist for the Washington Post and public affairs professor at George Mason University,

Sean Illing: Why have so many people lost faith in capitalism?

Now, we all know this, but I wrote the book because I think there is a feeling even among those of us who didn’t get left behind that this system has become too unfair, too ruthless, and rewards too many of the things we think of as bad. The system offends the moral sensibilities even of people who are benefiting from it.