Congress, the Corvair and Ratwatching 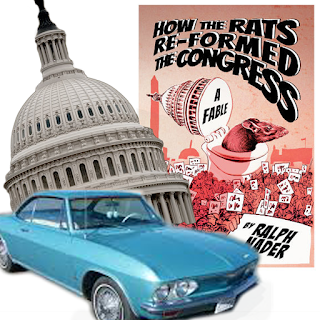 My childhood friend, Jeff Dunlap, drove a Corvair during high school. I’m pretty sure it was his dad’s car. But Jeff had great fun with it, driving to the local burger place, and such.

Neither of us cared much that a guy named Ralph Nader wrote a book call, Unsafe at Any Speed, outing Jeff’s Corvair as an unsafe car. Jeff like the places his car got him to and, as far as I can remember, his ride never went out of control. Still, now that I think about it, I do remember one time when Jeff backed up too fast, impaling it on a parking lot post and having to face the music when his Dad had to come rescue us, ingeniously extricating it using a car jack.

Speaking about genius, Mr. Nader qualifies. He nearly single-handedly created the civic movement that helped move the automotive industry toward adopting safety standards that have saved countless lives. His work cost him universal automotive industry hatred, but also made him internationally famous. Through the years Nader has faithfully maintained his devotion for making our world a better place to live and for holding corporate executives and politicians accountable when they don’t do the same. That, of course, translates to holding fire to the feet of the powers that be every minute of every day.

To do that, Nader has come up with a unique concept to help us “re-form” the U.S. Congress. He's written about it in his newsletter and book, How the Rats Re-formed the Congress, and created a website to help organize Congressional Ratwatchers Groups in every Congressional district.

I hope he’s as successful at Ratwatching as he has been saving lives.

Humorist Will Rogers was a previous generation's Ratwatcher. Asked about the source of his humor, Will Rogers remarked: "I just watch the government and report the facts."

Erected in 1939, this statue of Will Rogers represents the state of Oklahoma in the National Statuary Hall in the Capitol Building. Members of Congress walk pass it once in a while. Tradition maintains it is good luck to rub his shoes while passing.
Posted by Ron Baker at 2:31:00 PM