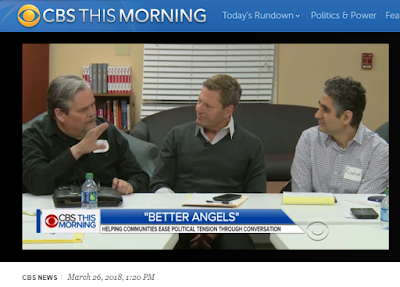 A group called Better Angles is helping Trump supporters and non-supporters discover they have some things in common and that they are better served by talking together than not.

“A recent CBS News poll found the number of Democrats and Republicans with negative views of the other party is growing. Unfavorable ratings hit almost 90 percent on each side in recent years. But a group called Better Angels is trying to bridge the gap.”

“It brings together people with differing opinions from the same community for face-to-face talks to ease tensions. CBS News correspondent Don Dahler visited a meeting in Lebanon, Ohio, where 14 people on both sides of the debate over gun control and the Second Amendment came together.”

"The idea is to stick to our own views and let others describe theirs," said David Lapp, who leads the discussion and enforces the rules. At Better Angels meetings, participants identify themselves as red or blue and the conversation is equally split.

Please go here for the CBS story and video.

According to their website, “Better Angels is a bipartisan citizen’s movement to unify our divided nation. By bringing red and blue Americans together into a working alliance, we’re building new ways to talk to one another, participate together in public life, and influence the direction of the nation.”

“The United States is disuniting. The last presidential election only made clear what many have feared – that we’re becoming two Americas, each angry with the other, and neither trusting the other’s basic humanity and good intentions. Today Americans increasingly view their political opponents not only as misguided, but also as bad people whose ways of thinking are both dangerous and incomprehensible. This degree of civic rancor threatens our democracy.”