Plowing Under Those Nasty Innovation Seedlings 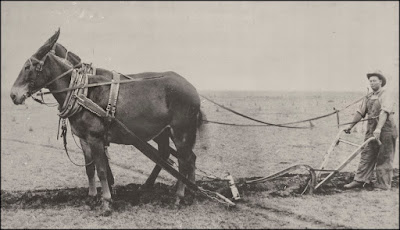 Back in the 70s & 80s, during the PC revolution*, IBM never was much of a competitor. IBM was mired in its Dark Ages mainframe and minicomputer world, while Apple regularly stomped all over their “technological innovation leadership” self-declared status.

Finally, when IBM introduced their PC, the old-world corporate IT departments would only buy IBM because, well, because, “that’s what we buy”. No graphical user interface (GUI) system or video graphics for them. IBM wasn’t selling that stuff. No VisiCalc, the spreadsheet program, or Word Star, the word-processing program, either. Because, after all, they were still punch card men at heart.

We know what happened to those “C-suite” execs”. They were, and still are, the innovation stifling types, so favored then as today. They see their role as preserving the existing corporation first and empowering their corporate lackeys to stomp on any glimmer of innovation without a second thought.

They feel safe making decisions that throttle innovation in favor of preserving the ways they know best. They are the ones who reward the corporate youth for keeping their ideas to themselves, accepting pauper wages, working through vacations, and Trump-like, create an atmosphere of chaos so everyone is always on guard for the next backstabbing attempt. These are the management teams that held tight to “proven” Big Blue technology as their corporations were buried under tons of dust thrown up by the early adopting, personal computer-aided, innovative, global competitors.

So, what are those antiquated, dust-covered, old boys doing today? Well, just like their innovation-stifling forefathers, they are doing the same ole thing. But, this time they are tossing out their skilled people, the employees who know something in favor of younger people who know nothing but will do nothing for a lot less pay.

It’s good to know that, like death and taxes, IBM’s leadership will always tie-up ole Bessie and plow under those nasty innovation seedlings and make lots of dust to save a few shekels. They sure did innovate this time around. Instead of hanging on to their punch cards, they freed-up some talented, proven people for the competition.

“Our latest in the Vox-ProPublica collaboration explores how IBM sidestepped age discrimination laws.”

“Last month, we reported that over the past five years, IBM has targeted its older U.S. employees for layoffs. The numbers are staggering: Since 2013, we estimated IBM eliminated more than 20,000 American employees ages 40 and over. We’ve collected the stories of over 1,400 former IBM employees and learned about their experiences during these job cuts. So exactly how does one of the country’s largest tech giants quietly push out this many older workers? Don’t we have laws to protect people at the end of their careers?”

Cutting ‘Old Heads’ at IBM
“As it scrambled to compete in the internet world, the once-dominant tech company cut tens of thousands of U.S. workers, hitting its most senior employees hardest and flouting rules against age bias.”

“In response to these claims, IBM spokesman Ed Barbini said: “We are proud of our company and our employees’ ability to reinvent themselves era after era, while always complying with the law. Our ability to do this is why we are the only tech company that has not only survived but thrived for more than 100 years.”

Vox
Published on Apr 20, 2018
Age discrimination can be very hard to prove.

In a ProPublica feature that collected the stories of over 1,400 former IBM employees, it was estimated that a staggering 20,000 American employees ages 40 and over have been eliminated by the company. How does one of the country’s largest tech giants quietly push out this many older workers? Don’t we have laws to protect people at the end of their careers?