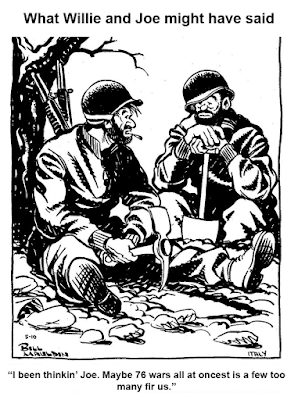 Bill Mauldin’s cartoons had a way of depicting the heart and soul of World War II combat vets that matched up with my Dad’s experiences. Mauldin’s Willie and Joe characters always seemed to be the voice of “universal truth”, a sort of timeless “vision” that rang true no matter where or when they were read. I offer the above rendition of Willie and Joe as a voice of reason from our past. Please forgive my poor attempt at it, Bill. 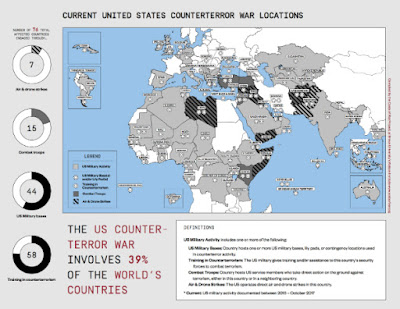 76 Countries Are Now Involved in Washington’s War on Terror
Tomgram: Engelhardt, Seeing Our Wars for the First Time, TomDispatch, 4 Jan 2018.

"The Costs of War Project has produced not just a map of the war on terror, 2015-2017 (released at TomDispatch with this article), but the first map of its kind ever.  It offers an astounding vision of Washington’s counterterror wars across the globe: their spread, the deployment of U.S. forces, the expanding missions to train foreign counterterror forces, the American bases that make them possible, the drone and other air strikes that are essential to them, and the U.S. combat troops helping to fight them.  (Terror groups have, of course, morphed and expanded riotously as part and parcel of the same process.)

"A glance at the map tells you that the war on terror, an increasingly complex set of intertwined conflicts, is now a remarkably global phenomenon.  It stretches from the Philippines (with its own ISIS-branded group that just fought an almost five-month-long campaign that devastated Marawi, a city of 300,000) through South Asia, Central Asia, the Middle East, North Africa, and deep into West Africa where, only recently, four Green Berets died in an ambush in Niger.

"No less stunning are the number of countries Washington’s war on terror has touched in some fashion.  Once, of course, there was only one (or, if you want to include the United States, two).  Now, the Costs of War Project identifies no less than 76 countries, 39% of those on the planet, as involved in that global conflict.  That means places like Afghanistan, Syria, Iraq, Yemen, Somalia, and Libya where U.S. drone or other air strikes are the norm and U.S. ground troops (often Special Operations forces) have been either directly or indirectly engaged in combat.  It also means countries where U.S. advisers are training local militaries or even militias in counterterror tactics and those with bases crucial to this expanding set of conflicts.  As the map makes clear, these categories often overlap.

"Who could be surprised that such a “war” has been eating American taxpayer dollars at a rate that should stagger the imagination in a country whose infrastructure is now visibly crumbling?  In a separate study, released in November, the Costs of War Project estimated that the price tag on the war on terror (with some future expenses included) had already reached an astronomical $5.6 trillion.  Only recently, however, President Trump, now escalating those conflicts, tweeted an even more staggering figure: “After having foolishly spent $7 trillion in the Middle East, it is time to start rebuilding our country!” (This figure, too, seems to have come in some fashion from the Costs of War estimate that "future interest payments on borrowing for the wars will likely add more than $7.9 trillion to the national debt" by mid-century.)

From 1967, the Smothers Brothers stood virtually alone, among contemporary performers of that time, opposing the Vietnam War (Conflict, or whatever you want to call it).  This was their version of a Phil Ochs' song, "Draft Dodger Rag", with guest star George Segal.