News from the Executive Sh**Hole 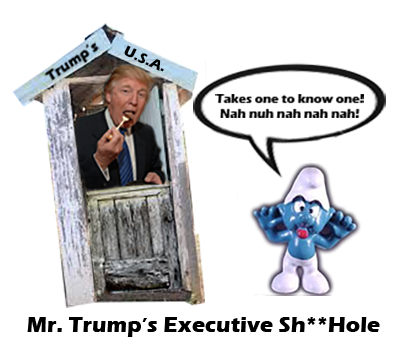 And now, these words from the Executive Sh**Hole...

(Do you smell what I smell? Even I can't make this stuff up.)

"During immigration talks in the Oval Office, President Trump reportedly grew frustrated, using a crude description of Haiti, El Salvador and African countries, according to a report from the Washington Post."

"Why are we having all these people from shithole countries come here?" Trump reportedly told lawmakers on Thursday.

The president then suggested that the U.S. try to increase immigration from countries like Norway, whose prime minister he met with this week."