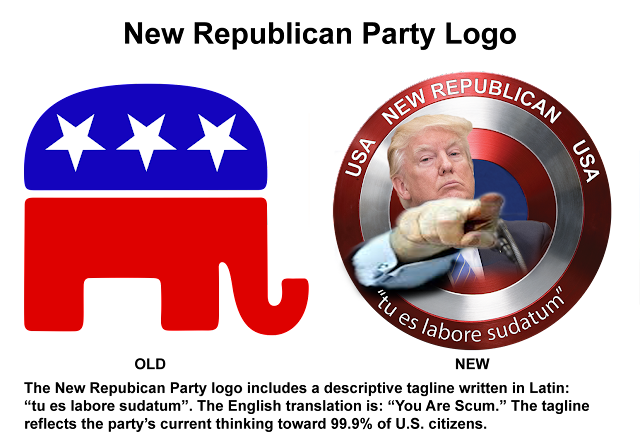 ALTERNATIVE NEWS FLASH...
From an anonymous source, deep within the White House… the Republican Party will soon release its new logo and descriptive tagline. Our source said, “It’s way past time for Republicans to present our true selves to the public. This new logo and tagline reflects who we are and what we believe about the people of the United States… and maybe the world, too. And, if people don’t like it, it’s not our fault. Obama never release a new logo and tagline for the Democrats. He was weak! But, we are strong and that’s why we unveiled this!”

Why do Republicans Think We are Scum?
No one really knows the deep psychological reasons why Republicans hate Americans so much and think we are all scum. But just form today's headlines, here are three stories that confirm the facts of life:

Georgia GOP Candidate For U.S. House, Karen Handel: 'I Do Not Support A Livable Wage'

Senate Republicans Are Closer Than Ever To Repealing Obamacare