Back to Paris 241 years later… Americans looking for help 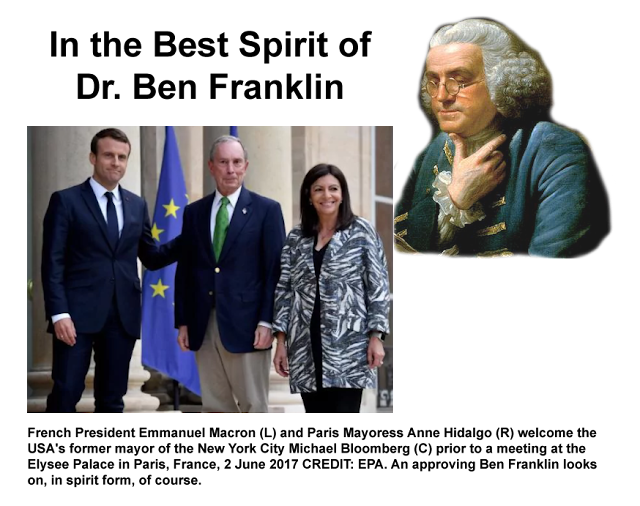 Reprising Ben Franklin’s visit to France in 1776, Americans are once again back in Paris looking for help and, differing from Dr. Franklin’s mission, to reassure the world that Americans are not all as stupid as their President.

The message is that American cities, states and regions know what is best for them and how to work together to solve the problems which universally confront them. That is why, in the face of federal government inaction and downright stupidity, city mayors (on a world-wide basis) have come together in their best interests to solve the problems which confront them all. And, it’s not only local and regional governments. Major corporations long ago determined that their best interests would be served if they worked together toward sustainable solutions to world problems, including energy, and deal with climate change issues. See: World Business Council for Sustainable Development.

I’ve written about these positive efforts here, Global Local, and the multi-trillion dollar opportunity that sustainability offers here, Our Legacy Will Be Opportunity.

Now comes the latest. In the face of President Trump’s outright stupidity the U.S. mayors, governors, corporations and the vast majority of the American  people are once again making it clear that they will continue with their efforts to “reduce America’s greenhouse gas emissions to 26% below 2005 levels by 2025”.

It makes me supremely relieved to read of this happening. And it reminds me of a time long ago when Americans traveled to Paris looking for help to sustain their new republic. Back then, they found the help needed in France. Today, we’ve gone to Paris join with the rest of the world looking for help to overcome the stupidity we have allowed to rule our nation.

“The American government may have pulled out of the agreement, but the American people remain committed to it — and we will meet our targets,” former New York Mayor Michael R. Bloomberg, a special envoy for cities and climate change to the United Nations, said Friday after meeting in Paris with French President Emmanuel Macron and Paris Mayor Anne Hidalgo.

“It will be a heavy lift. States and (160) cities would need to meet a pledge to reduce America’s greenhouse gas emissions to 26% below 2005 levels by 2025, America’s self-declared target under the deal.”

“Even with buy-in from the federal government, there were doubts about hitting that nonbinding target. Trump has made it a lot more complicated by spurning the accord — but not impossible.”*