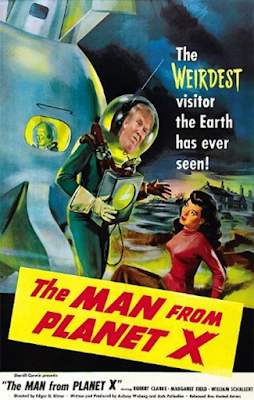 With the recent disclosure that Mr. Trump may soon be moderating his comments and become more acceptable to the mainstream Republicans, we now know the truth. It's all been some weird trip!*

Whew! I am greatly relieved to know that The Donald is just one more of the same-old-same-old American political people... say X to get nomination... then say X.2 to make the powers that be happy.

Is he really the Man From Planet X??

Apologies to the real man from planet X. The Man From Planet X is a 1951 American science fiction film starring Robert Clarke, Margaret Field and William Schallert. It was directed by Edgar G. Ulmer. Here's the trailer:


* From CNN: Paul Manafort, Trump's senior adviser and a long-time Republican operative, said that Trump understands the changing nature of the campaign and is prepared to "evolve."

"He recognizes that things aren't static. That what is right to start the campaign isn't necessarily the way you finish the campaign," Manafort told CNN Thursday night after he met with RNC officials here.