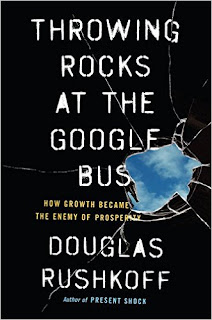 So, how do we make a "...more resilient, human way of doing business?"

Dr. Douglas Ruskoff provides a path to a solution in his latest book: Throwing Rocks at the Google Bus.

Here's an excerpt from a recent review:
"The rules, Rushkoff argues, were made not by God, but by aristocrats around the 11th century, intent on preventing the peasants from creating a vibrant economy not controlled by the ruling class. Today, the rules can be whatever we want them to be. Rushkoff doesn't want a revolution, just a rethinking. 'They worked really well for 700 years of colonial expansion,' he says, 'but they could use a tweak or two.'"

"Can we actually get there? Will the people made rich by the current economic system listen to his prophecies and realize their success is built on a crumbling foundation and alter their business models—and the very system that made them successful in the first place? Rushkoff says he thinks we can, and that it won't take economic collapse or violent revolution, but just common sense (he admits, he's having an optimistic week). He writes in the book that CEOs he talks to are exhausted by being forced into the short term thinking of quarterly growth, and says that as people are reading the book, they're relieved, because the solutions within give them a path to a better business model: 'I'm getting emails from CEOs from Fortune 50-sized companies saying, 'I can use this, it's going to work.' Because these CEOs have been looking for ways to reconfigure to this slow-growth, new normal economy that we're actually in without getting fired or sued.'"

"So just remember, human beings made this system, and human beings can change it. And one thing we all can agree on is that the system isn't working: 'Big business and small business, extreme libertarians and Bernie Sanders people all are looking toward the same solution. … We're realizing that we don't really care about our ideologies as much as about the fact that we've let a system get out of control.'"

Please read the review, Does This Make My Customers Rich? Business Tips For The Future Steady-State Economy, Throwing Rocks at the Google Bus, Douglas Rushkoff