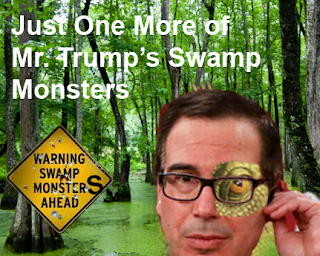 No, this is no 1950's grade F, sci-fi movie. Those were actually fun to watch and leave behind in the neighborhood theater. No, this one is for real.

Here is how it goes:
The list is extremely impressive. So many protections to destroy, laws to disobey or just not enforce, money to steal.

Mr. Trump’s swamp creatures have been really, really busy. Chief performer among the money stealing or at least unaccounted for, just "might be" the Treasury Secretary himself, Mr. Steven Mnuchin.

I say "might be" because Mr. Mnuchin refuses to account for the $500 billion Congress trusted him to disperse to businesses, so they’d keep their employees employed until we extricate ourselves from the COVID economic depression.

That $500 billion is a lot of dough to handle even for a guy like Mr. Mnuchin.

After all he only collected a few of his millions by illegally foreclosing on thousands of homeowners during the last Too-Big-To-Fail-Banker-Saving card trick. Sen. Tammy Duckworth (D-Ill.) aptly described him by painting the Mnuchin picture using the words "greedy" and "unethical." She backed it up with these blunt words: "Whether illegally foreclosing on thousands of families, skirting the law with offshore tax havens or helping design tactics that contributed to the 2008 financial crisis, Steve Mnuchin made a career — and millions of dollars — pioneering increasingly deceptive and predatory ways to rob hardworking Americans of their savings and homes."

Which swamp does Mr. Mnuchin presently occupy? That’s easy to answer. He is Mr. Trump’s very own swampy creation.

There. Now I get my quarter admission back from the theater. That’s great. But we still got to cipher out where the $500 billion has gone.