Whose Socialism? Yours or the Corporations? 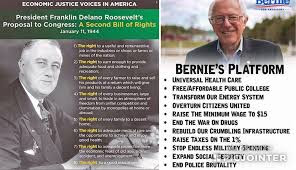 Way back in the 1936 at Madison Square Garden, Pres. Franklin D. Roosevelt said:

FDR was right then.

Likewise, Bernie Sanders is right today. During his speech at George Washington University, 12 June 2019, he said,

In 1944, FDR proposed an economic bill of rights but died a year later and was never able to fulfill that vision. Our job, 75 years later, is to complete what Roosevelt started.

That is why today, I am proposing a 21st Century Economic Bill of Rights. #DemocraticSocialism. pic.twitter.com/VvEUjIyoNk
— Bernie Sanders (@BernieSanders) June 12, 2019


It is time to guarantee our second Bill of Rights. If we do not... we will have none at all.