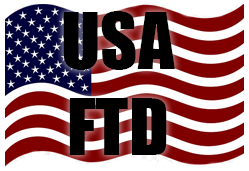 Since Congress has determined that now is the time to repeal what little oversight we have over the Too-Big-To-Fail bankers, it’s also time to revive a concept from our nation’s past.

Yes, only a few years when the Wall Street boys and gals made a financial transaction, a minuscule tax was attached. So, a few bucks went into the U.S. Treasury.

It’s time to revisit the idea. Only this time, let’s make the whole idea a bit more patriotic.

Let’s call it the, USA Financial Transaction Donation (FTD). That way we’ll all fell a little better about it because it’s not a tax… it’s a donation… and it’s just for Uncle Sam, don’t you know.

Best of all, the “R” people can run it up the flag pole and feel good, too.

The FTD is simply a sales tax on a trade of stocks, bonds, or derivatives. In fact, it’s just like the sales tax which most of us pay every time we purchase something, only we pay a lot more... like .06% on the things we purchase here in Michigan.

The FTD legislation already proposed by Rep. Keith Ellison (D-MN) and Sen. Bernie Sanders (I-VT) would be in the order of 0.5 percent on stocks, 0.1 percent on bonds, and 0.005 percent on derivatives or other investments.

As I mentioned, FTDs are not new. In fact, they are currently law in the United Kingdom and 20 other nations, including France, China, and Italy. Indeed, a financial sales tax was formerly the law in the United States, too, from 1914-1966.

How much money are we talking about here?

According to Robert Pollin, co-director of the Political Economy Research Institute at the University of Massachusetts, Amherst, such a tax could raise around $220 billion per year, which equalsapproximately 1.2 percent of current U.S. GDP.

Still, that’s a good amount to keep in reserve for that Come and Get it Day when we are once again forced to bailout the Too-Big-To-Fail bankers.

Have you heard about the Robin Hood Tax movement?