Somethin’ Is Out of Whack 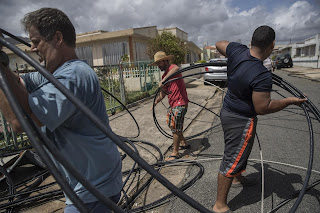 Michigan snow storms, terrible wind storms, tornadoes and otherwise yucky weather, all have at least one thing in common - a tendency to mess with power lines and such.

It's been my experience, at least, that bad weather conspires to leave people without electricity for a while, sometimes a long while.

But, when that happens, in addition to local DTE workers, we usually see a bunch of out-of-state trucks, loaded with linemen from other utilities, working to restore downed power lines and blown transformers. So, in short order, repairs are completed, and things start goin’ back to normal.

Seems that whole reciprocity thing is not working in Puerto Rico. And, most of the people of Puerto Rico are still without life-sustaining electricity.

And, to top it off, why has an unknown, two-man outfit from Montana “won” a $300 million , no-bid, contact to rebuild Puerto Rico’s hurricane-ravaged power grid?

Indeed. Somethin’ is royally out of whack.

“For the sprawling effort to restore Puerto Rico’s crippled electrical grid, the territory’s state-owned utility has turned to a two-year-old company from Montana that had just two full-time employees on the day Hurricane Maria made landfall.”

“The company, Whitefish Energy, said last week that it had signed a $300 million contract with the Puerto Rico Electric Power Authority to repair and reconstruct large portions of the island’s electrical infrastructure. The contract is the biggest yet issued in the troubled relief effort.”

“Whitefish said Monday that it has 280 workers in the territory, using linemen from across the country, most of them as subcontractors, and that the number grows on average from 10 to 20 people a day. It said it was close to completing infrastructure work that will energize some of the key industrial facilities that are critical to restarting the local economy.”

“The power authority, also known as PREPA, opted to hire Whitefish rather than activate the “mutual aid” arrangements it has with other utilities. For many years, such agreements have helped U.S. utilities — including those in Florida and Texas recently — to recover quickly after natural disasters.”

“The unusual decision to instead hire a tiny for-profit company is drawing scrutiny from Congress and comes amid concerns about bankrupt Puerto Rico’s spending as it seeks to provide relief to its 3.4 million residents, the great majority of whom remain without power a month after the storm.”

“The fact that there are so many utilities with experience in this and a huge track record of helping each other out, it is at least odd why [the utility] would go to Whitefish,” said Susan F. Tierney, a former senior official at the Energy Department and state regulatory agencies. “I’m scratching my head wondering how it all adds up.” - more -