Newly Discovered... in Your Head 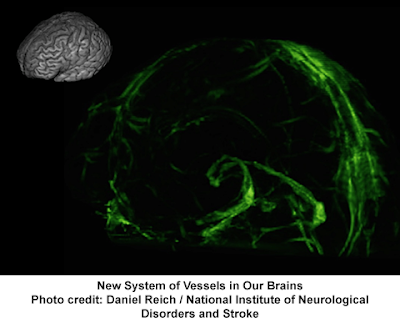 "Learning and discovering is forever," a professor once said to me.
She was right...

"The lymph vessels probably escaped detection because they’re  inside a thick membrane, the dura mater, which is the consistency of leather. They run alongside blood vessels that are much larger, and on MRI the signal that creates the images is dominated by the blood vessels."

Daniel Reich, (Senior investigator, National Institute of Neurological Disorders and Stroke), adds the other obvious but important factor: “And, I mean, no one was looking for them.”

"The assumption was never that the brain doesn’t drain waste. The major pathway taught in medical school is that waste around cells goes into cerebrospinal fluid—the clear fluid that bathes the brain and spinal cord—and from there gets absorbed directly into the blood through structures called arachnoid granulations. Reich also explained that some fluid is understood to drain through tiny pores in our skulls, mostly at the top of our noses, and then get absorbed into the lymphatic system through the mucous membranes of the nose, and then, from there, go down into the lymph nodes of the neck."

"It now seems clear that there is a third pathway through which byproducts get out of the brain—and it may be the most important—through these specialized vessels in the dura mater."

“Looking back, those other two really seem insufficient,” said Reich.

"It remains a mystery exactly how that lymph fluid gets into these vessels. There are a lot of open questions that show how far we are from fully understanding many neurologic disorders—or even basic day-to-day functioning of the nervous system."

"But this pathway appears crucial to life and health. A 2013 study in Science found that glymphatic flow seems to increase by almost double during sleep (in mice). Sleep disturbances are a common feature in Alzheimer’s and other neurologic disorders, and it’s possible that inadequate clearing of the brain’s waste products is related to exacerbating or even causing the disease. In a 2016 study, also in mice, glymphatic dysfunction appeared to cause accumulation of Alzheimer-related amyloid proteins."

"The flow of glymphatic fluid can change based on a person’s intake of omega-3 fatty acids, a study showed earlier this year. Preliminary findings like these together suggest a pathway through which nutrition and sleep can be related to neurologic disorders. Optimizing this glymphatic flow could become a central theme for the future of neurologic health."