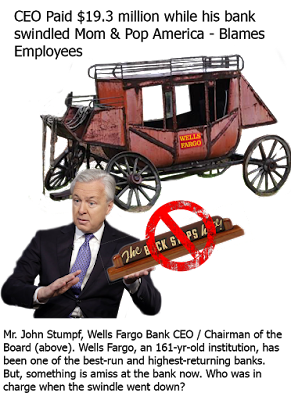 “At least 5,300 employees were fired over a five-year period for “inappropriate sales conduct’”, he said. But where were senior executives during that time? And, who established the environment that pushed the “employees” into breaking the law?

It's not my fault!! Those tellers and service peons did all that multimillion-dollar swindling! In so many words that's what John Stumpf, Wells Fargo Bank CEO / Chairman of the Board of Directors told the Feds.*

Nope, for mom and pop America, and poor lit’le ole Wells Fargo, the third largest bank in the U.S., Mr. Stumpf was asleep at the switch, not doin’ his C-suite duties overseeing the workin’ people.

So much so that Wells has a $190 million fine to pay for setting up two million fraudulent deposit and credit card accounts and then stealing millions from customers by billing ‘em for unauthorized Wells Fargo services.

Sound like the ole west was still alive – at least in Stumpf’s mind – until the new sheriff rode into town. He probably won’t worry too much, though. Stumpf pocked $19.3 million in compensation last year alone. And, the executive in charge of Wells Fargo Bank branches is slated to retire this year with a retirement package worth around $93 million.

Not bad for lookin’ the other way when stealing from Mom and Pop America.