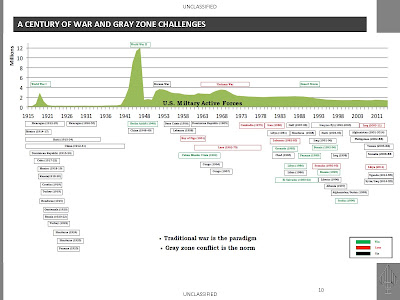 A few days ago I read a disturbing article written by Nick Turse for TomDispatch. (1.)

It focused on a document which surfaced through the Freedom of Information Act (FOIA). Turse discovered a September 2015 briefing slide which was produced by the Intelligence Directorate of U.S. Special Operations Command (SOCOM), entitled “A Century of War and Gray Zone Challenges”. (2)

SOCOM is the “umbrella” command which is charged with operating elite units of the U.S. military, among them, the Army Rangers, Army Special Forces (the Green Berets), and Navy SEALS,

The slide pointed out that over the past 100 years, the U.S. has participated in 64 conflicts, resulting in 9 wins, 8 losses and 42 ties. That translates into five full-fledged wars - three wins (World War I, World War II, and Desert Storm), one loss (Vietnam), and one tie (Korea). The other conflicts? SOCOM puts them into the “gray zone” which is now “the norm”. Our record in the gray zone stands at 9 victories, 8 losses, and 42 ties.

For me, the “record” was not the disturbing thought. Rather it was the “how” and “why” we committed our military to 64 conflicts. Plus the fact that most Americans never considered why we were launching them and soon forgot they happened.

The article ends with a one sentence summary by Turse and a quote from retired Army colonel Andrew Bacevich, a professor of history and international relations at Boston University: “An American century of carnage and combat has yielded many lessons learned, but not, it seems, the most important one when it comes to military conflict. “We can kill people, we can break things,” Bacevich observes, “but we don’t accomplish our political goals.”

I’ll bet you believe that the U.S. military is the best the world has ever seen. It’s likely that members of your family, like my own, have honorably served our nation in the past or are serving today. And, certainly, each year, we spend an immense amount of dollars on our military. So by these measures alone the “Best Ever Military” rings true in a multitude of ways.

Still, I don’t know about you, but I stopped using modifiers like “the best” in the now dusty past.

“The best” dredges up painful memories and fears about a time in my life that I hoped would remain buried in my backyard, along with a few other artifacts from the early 70s – a pair of boots, photos and articles of clothing.

It was late night in early fall. All I wanted was to forget and somehow shed the nagging feeling that I had not done my duty, not done my part, not done enough… that I should have died in some godforsaken jungle in Southeast Asia. After all, I thought, what good have I done with the extra time I had been granted?

I graduated from high school in 1967. It was different then. The boys had perhaps four choices, go to college (if your grades were reasonable), enlist in the military, wait a few days until the local draft board (Selective Service) sent you greetings, or try to go to Canada as a draft dodger.

There was tremendous pressure on kids then. Nearly everywhere, the newspapers, magazines, radio, TV, movies, celebrities, relatives, family friends – nearly all of them were vehemently telling you what to do with your life. What your patriotic duty was. That meant it was your role in life to go to Vietnam and kill the commies - the gooks - for America.

And, by the way, before you go… get your hair cut, put on a suit, toe the line, get a job, because if you don’t you’re no better than one of those doper hippies.

Not one of the adults in my life, save my father, questioned why it was our patriotic duty to support the War in Vietnam. They just accepted as “fact” the words placed in the mainstream media by our government: “We were attacked in the Gulf of Tonkin. The Communist aggressors were torturing women and children in Vietnam… the dominos (other nations in Southeast Asia and around the world) will fall (be taken over) if we don’t make a stand in Vietnam and stop “the Russians and Chinese” Communists.”

Years later, aided in a great part by FOIA, we discovered the documents that proved our suspicions were valid. The Gulf of Tonkin never happened. We were duped then and later, again. Remember the nonexistent “weapons of mass destruction”? The Vietnam War and the Iraq Wars were horrendous miscalculations – decisions born in secrecy to assert U.S. hegemony as clandestine conflicts only to metastasize into crimes against humanity. (4.)

Today, as it has been throughout these past 100 years, it is policy and “leadership” that counts much more than which military is “the best”.

The “why” upon which we decide to engage our military counts above all else and our leaders must be held accountable for their decisions to commit our people to a conflict.

If anything the sorry, 100-year record of conflict “results” clearly demonstrates the fallacy of allowing that decision to be rendered in secret.

Sane, honorable, elected leaders who prioritize the welfare of our people first - above corporate profit - and act within the laws of our nation must be the leaders who render decisions to commit our military in any instance.

Will we continue to follow the psychopathic rational that has driven our nation for the past 100 years? Or, will we finally realize the insanity that drove our past leaders is simply that – insanity.

Resources
1. Killing People, Breaking Things, and America's Winless Wars, Nick Turse, TomDispatch, 27 Sept 2016.
2. “A Century of War and Gray Zone Challenges” -- A September 2015 briefing slide produced by the Intelligence Directorate of U.S. Special Operations Command (SOCOM).
3. The Green Berets, (review) Roger Ebert, 26 June 1968
"The Green Berets" simply will not do as a film about the war in Vietnam. It is offensive not only to those who oppose American policy but even to those who support it. At this moment in our history, locked in the longest and one of the most controversial wars we have ever fought, what we certainly do not need is a movie depicting Vietnam in terms of cowboys and Indians. That is cruel and dishonest and unworthy of the thousands who have died there. more

Kill Anything That Moves, The Real American War in Vietnam, Nick Turse.