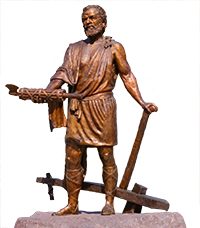 Lucius Quinctius Cincinnatus  (519 BC – 430 BC) a Roman aristocrat and statesman whose service as consul in 460 BC and dictator in 458 BC and 439 BC made him a model of civic virtue. Twice granted supreme power, Cincinnatus held onto it for not a day longer than absolutely necessary. Early in his life, due to the actions of his son, Caeso Quinctius, Cincinnatus was forced to pay an immense fine, to sell most of his lands and compelled to live in humble circumstances on a small farm, where he and his family were able to subsist on the work of his hands. George Washington admired Cincinnatus. Today, would we value or denigrate Cincinnatus for placing public service above personal gain? (Wikipedia)
Posted by Ron Baker at 9:53:00 AM

Email ThisBlogThis!Share to TwitterShare to FacebookShare to Pinterest
Labels: Cincinnatus