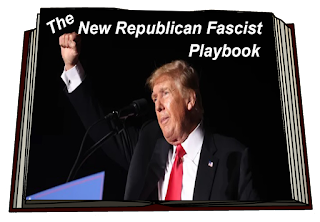 A year has passed since Trump’s failed 6 Jan coup.

Despite lacking even one iota of proof, Republican Party leaders unrelentingly, in lock step, continue to block Congressional investigation into uncovering the leadership and funding of the coup as well as foment the “Big Lie” that the presidency was stolen.

Additionally, party leaders, such as Mitch McConnell, have acknowledge that the Republican Party has no legislative agenda for the coming year and the party itself has no platform whatever, save to follow the will of mentally ill Trump. Alarmingly, it has also become apparent that the Republican Party has metastasized into a New Republican Fascist Party, implementing pervious fascist steps to seize control of government and install Trump as dictator.

Incite followers with The Big Lie, “the election was stolen”, to overthrow the lawfully elected Biden administration

Fortunately, the New Republican Fascist Party playbook has a history, so we know what is likely coming next because fascism is a form of far-right, authoritarian ultranationalism characterized by dictatorial power, forcible suppression of opposition, and strong regimentation of society and the economy.

Fascism gained prominence in 1920s Europe, funded in large part by U.S. bankers and industrialists. In the United States, many of the same wealthy elite backed an attempt to overthrow President Franklin D. Roosevelt and install a fascist regime/ dictatorship in what became known as the Wall Street Putsch (1933).

Fascism rose again in the form of the America First Committee (1940) and other groups; then again manifesting as the Tea Party Republicans (2009); then surfaced once more under Donald Trump as US president (2016).

Arguably, the German and Italian fascists modeled themselves to a great degree on preceding, post-Civil War America racists organizations, among them, the Ku Klux Klan, the Silver Shirts, the Red Shirts, and others.

What can we do to stop the New Republican Fascist Party?

First, demand that media recognize it for what it is... a fascist gang that attempted to overthrow our republican democracy... and talk about it as such. As Robert Reich discusses (below), "...mainstream media draws a false equivalence between the right and the left and misleads the public about what's really at stake." There is no longer a balance between Democrats, who are working to preserve our democracy and Republican Fascists, who are actively working to overthrow it.

Second, call out each of the Republican fascist traitors for attempting to overthrow our Constitution. And, third, demand that the coup leaders, no matter their political or social status, face the consequences of their crimes to the full extent of the law.

The Media Bias Nobody is Talking About | Robert Reich

Go here for PDF enlargement/description.
Posted by Ron Baker at 9:51:00 AM