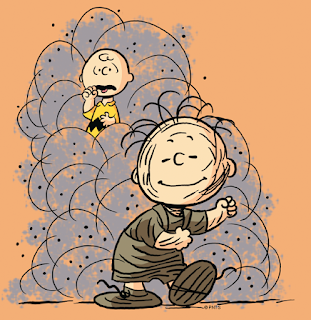 In one way, Mr. Trump reminds me of Charles Schultz’ Peanuts character, Pig Pen, who was always surrounded by a cloud of dust and debris.

But in Mr. Trump’s case, wherever he goes a cloud of chaos will surely appear.

Just the other day Mr. Trump managed to create a cloud of chaotic pollution while committing an act worthy of impeachment and imprisonment by encouraging North Carolina voters vote twice this November. By doing so, in North Carolina, he violated the law and committed a felony

Oh, by the way, voting twice in the same election is also prohibited under federal law 52 USC § 10307.

Move over pig pen… The Voter Fraudster in Chief has appeared.

Here is how CBS reported the story:

CBS This Morning, Sep 3, 2020
President Trump and his administration are continuing to cast doubt on mail-in voting two months ahead of the election. Speaking to his supporters in North Carolina, President Trump encouraged them to test the system and illegally vote by mail and in person, a potential felony. Ben Tracy reports.

Email ThisBlogThis!Share to TwitterShare to FacebookShare to Pinterest
Labels: Voter Fraudster in Chief