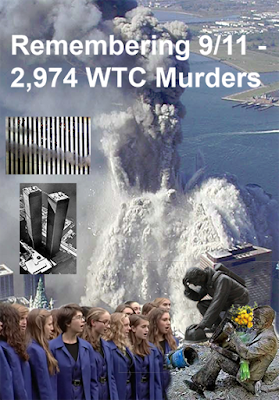 Immersed as we are in the Trumpian world, where disinformation, grifting, fraud and lying are as common as cockroaches in the dead of night, ferreting out 9/11 truth seems nearly impossible.

To this day a large portion of the U.S. population still accepts the 9/11 Commission Report as gospel, just like they accept Mr. Trump's unrelenting traitorous duplicity as well as his egregious incompetence leading to the deaths of nearly 200,000 Americans due to the COVID plague.

But 9/11 remains a cold case – the murder of 2,974 innocents  – as well as a demarcation point which opened the door to our Trumpian-Fascist present when we learned that the Trump Administration, "...siphoned around $4 million from New York City Fire Department’s fund for its September 11 first responders."

David Ray Griffin David Ray Griffin (born August 8, 1939) is a retired American professor of philosophy of religion and theology, and a political writer. Along with John B. Cobb, Jr., he founded the Center for Process Studies in 1973, a research center of Claremont School of Theology which seeks to promote the common good by means of the relational approach found in process thought. Griffin has published a number of books on the subject of the September 11 attacks, suggesting that there was a conspiracy involving some elements of the United States government.

Bruce Springsteen & The E Street Band - The Rising (Live In Barcelona)
On October 16, 2002, two months into The Rising Tour, Bruce Springsteen & The E Street Band took the stage at Palau Sant Jordi in Barcelona, Spain, performing over two and a half hours of new songs, classic hits, fan favorites and rarities. Feel the passion and power of their set with Live In Barcelona.
Posted by Ron Baker at 9:05:00 AM

Email ThisBlogThis!Share to TwitterShare to FacebookShare to Pinterest
Labels: 9/11, murders