Evil Really Does Walk Among Us Evil really does walk among us. Today, we know evil as the Republican Party.

The VA says it is essentially ending a special $460 million program that has dramatically reduced homelessness among chronically sick and vulnerable veterans.

Four days after Veterans Affairs Secretary David Shulkin held a big Washington event to tout the Trump administration’s promise to house all homeless vets, the agency did an about-face, telling advocates it was pulling resources from a major housing program.

The VA said it was essentially ending a special $460 million program that has dramatically reduced homelessness among chronically sick and vulnerable veterans. Instead, the money would go to local VA hospitals that can use it as they like, as long as they show evidence of dealing with homelessness.

Retirement Benefits Will Likely Be Cut. Because the plan proposes to add at least $1.5 trillion to the national debt, fiscal conservatives say the imbalance needs to be offset by either cuts of "entitlement" programs like Medicare, Social Security and Medicaid or tax increases... 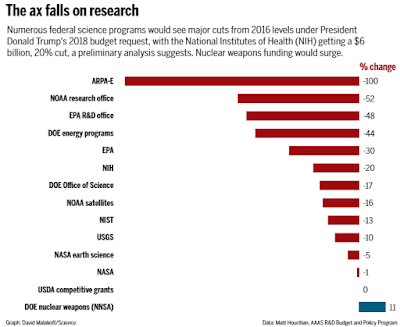 Republicans would rather give heirs and heiresses a tax break than care for needy kids.

More than two months ago, Congress let the Children's Health Insurance Program expire, and has offered no indication it will provide funding any time soon. Just last week, Sen. Orrin Hatch (R-UT) told Sen. Sherrod Brown (D-MA) on the Senate floor that, "the reason CHIP's having trouble is that we don't have money anymore." Two days later he voted in favor of a trillion-dollar tax cut for multinational corporations and the wealthy.

For the New York Times' Paul Krugman, this is just the latest salvo in a Republican war on children. In his Thursday column, he argues the GOP is further enriching its already fabulously wealthy donors at the expense of America's youth. Take CHIP, which provided health care to 8.9 million kids whose parents could not afford it last year. The estate tax would finance the program and then some—the former generates $20 billion in revenue while the latter costs taxpayers $15 billion—but Republicans would rather give a tax break to heirs and heiresses worth millions (or more).

"Are there any possible defenses for this choice?" Krugman asks. "Republicans like to claim that tax cuts pay for themselves by spurring economic growth, but no serious economists agree—and that’s the case even for things like corporate tax cuts that might have some positive economic effect. Applied to inheritance taxes, this claim is beyond absurd: There is no plausible argument to the effect that letting wealthy heirs claim their inheritance tax-free will make the economy boom."

The GOP's ridiculous argument that the estate tax hurts small businesses and family farms really demands no response, but Krugman provides one anyway. Just 80 ("eight-zero") such taxpayers would qualify at all. As for Chuck Grassley's claim that the country needs to reward those who invest rather than spend their money on "booze or women or movies," Krugman offers this rejoinder: "Yes, indeed, letting the likes of Donald Trump Jr. inherit wealth tax-free is a reward for their fathers’ austere lifestyles."

What Republicans will never acknowledge, despite a wealth of supporting economic data, is that increasing aid to poor kids ultimately saves the government money. The healthier children are and the more financial support they receive, the more likely they are to become productive members of society who pay their own taxes.

"But such results, while interesting and important, aren’t the main reason we should be providing children with health care and enough to eat," Krugman is quick to clarify. "Simple decency should be reason enough. And despite everything we’ve seen in U.S. politics, it’s still hard to believe that a whole political party would balk at doing the decent thing for millions of kids while rushing to further enrich a few thousand wealthy heirs."