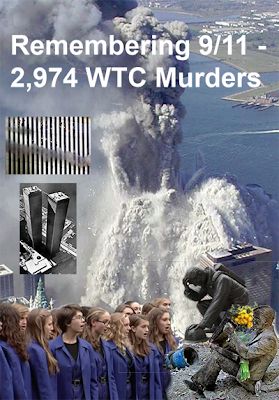 It's been 16 years since 2,794 people were murdered before our eyes.

There is no statute of limitations for murder.

Similar to the day President Kennedy was murdered, I remember where I was and what I was doing when the World Trade Center Towers the other five WTC buildings were destroyed, 11 Sept 2001, don’t you?

I turned the TV on that morning to see if there was some reason why my Internet connection had suddenly frozen up. Perhaps, I speculated, someone had demolished the Comcast cable somewhere close by.

Instead of a car accident, I learned that the one of the WTC towers was on fire. I didn’t know it then, but our world had changed again, once more in a very bad way.

In shock, I suspect, after seeing several people jump from the WTC, I later accepted our government’s explanation of the collapse of the impossibly huge buildings. After all, I’d seen it all on TV, hadn’t I?

Please go here for the rest of the article.


Sarah McLacklan’s I Will Remember You