Can We "Disengage" from American Fascism? 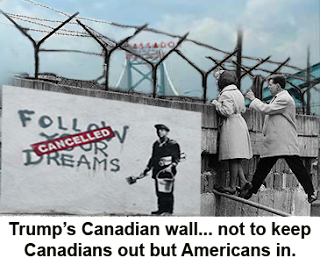 How do you feel about giving up? Maybe even hiding or leaving the U.S.?

You know... let the 46% of the voters who supported Pres. Trump have their way and go live somewhere safe, far from the nasty tentacles of steamroller Fascist America.

The idea is that things have gone way too far from the America we believed in as children and there is literally nothing one can do to stem the tide unleashed since the 9/11 cold case murders of more than 3,000 innocents.

Further, the rationale goes, resistance of any kind actually helps the American Fascists by creating a boogeyman-enemy for them to toss to their zealots. Like throwing the immigrants and the media before... now it will be anyone opposed to the American Fascists... and the true believers will once again eat it up in one gulp... like a piece of meat tossed to a starving dog. 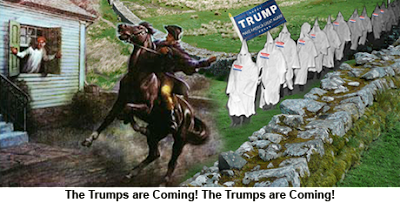 While my mind says that there really is no place in the world safe from a drone, cruise missile or smart bomb, at least one author believe that “disengagement” is our only salvation against American Fascism. Here's his article:

This Is a Fight Against Fascism—Our Resistance Tactics Have to Change,
By Anis Shivani, AlterNet, 5 Mar 2017*

There continues to be a gross underestimation, even amongst politically aware liberals, of what we are really up against, and how to counter it. Increasingly, our fellow citizens are resorting to the concepts of fascism to describe the current situation, but this is not necessarily followed by any cogent reflection on what the political subject under fascism needs to do. Ordinary liberal prescriptions have no chance of success under a regime that has moved into an overt fascist mode; moreover, the unacknowledged continuities from the recent neoliberal past, which led to the fascist overture in the first place, mar any consistency of thought amongst intellectuals, activists, and ordinary citizens.

The time has come to explore modes of existence that only make sense under a fascist regime, or rather, they are the only modes that make sense under fascist conditions. Above all, the question of moral disengagement from any existing political practice must be taken seriously, and this includes so-called “resistance.” Are there things that pass under the activist rubric today that are actually strengthening rather than weakening fascism? If that is the case, then those activities must undergo severe scrutiny, because it may well be that what seems like activism is actually passivism, and vice versa.

I started writing about a “soft” American totalitarianism for the first time in 1998, in the wake of the Monica Lewinsky scandal. American civic institutions seemed to me to have stopped functioning for the first time in 1994, after the Gingrich takeover, which made me take a step back, only to reemerge, awakened, when the Lewinsky scandal happened. I was not interested in the content of the scandal, which was a mere pretext to engineer reaction in a form we had never seen before without the instrument of twenty-four-hour cable news, but the way in which perceptions were being manipulated seemed to me to be mortally dangerous for democracy.

After 9/11, I resorted to the vocabulary of fascism for that whole decade, often comparing and contrasting Bush’s early years to the Hitlerian model, since this was what I knew best then. However, once I started studying Italian fascism seriously about seven years ago, it has seemed to me that the original Mussolinian model is more apt, because of some important missing elements in the way fascism has been developing in this country. During the 2016 election campaign, I identified points of similarity between Trump and Mussolini, and considered whether he was better seen as a fascist or a populist authoritarian. Clearly, in the month since he took over he has entered an overtly fascist stage, with elements of both Mussolini and Hitler in play.

But I think that instead of these admittedly helpful historical comparisons it might be more clarifying now to conceptualize a new form of fascism: the third important variant, if you will, following the original Mussolini model and the later Hitlerian model, which was a development of and departure from the original in many respects.

Unless we find a way to stop American Fascism this could happen again - this time to anyone who rankles the Trumpian regime: