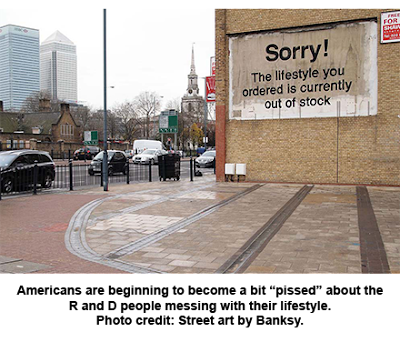 The other day I posted a discussion centering on article by Anis Shivani, This Is a Fight Against Fascism—Our Resistance Tactics Have to Change*, in which he advocated “disengagement” as a solution to protesting the full-blown American Fascist Movement currently fronted by the Trump/Republican Party. Citing the Italian and German Fascist parties (1920-1945), the author argued that if protesters do not confront the Trump American Fascists they deny them a continuous array of boogeyman-enemies to trot out in order to distract and enrage their naïve supporters, so that they can continue to institute their fascist regime and maintain control.

Today, I offer for your consideration a glimpse of what is actually happening throughout the in opposition to the Trump/Republican Party and elements of the Democratic Party, which together comprise the modern American Fascists Movement.

Shivani believes that our plunge into fascism began with House Speaker of the U.S. House of Representatives Newt Gingrich’s shutdown of the federal government in 1995** during the Clinton presidency, and in earnest, under Bush II, following 9/11*** (and continued under Obama). While I agree, I see that era as a continuation of our Fascist past. The American Fascist Movement can be traced to the Robber Barons era (late 1800s – early 1900s), followed by the industrialists and banker elite attempted c coup d'état of Franklin D. Roosevelt (1933#) and later the brothers, Allen and John Foster Dulles, domination of the OSS, the U.S. State Department and CIA pre and post WWII as the founders of American Fascism (1930s-1960s##).

With this background in mind it’s worth considering that (thanks to Pres. Trump and the current R-people controlled federal government) millions of Americans are now realizing that something bad has happened to our “representative / constitutional democracy”. It is just not working as one might hope, i.e. our federal government is not representing the will of the majority of voters. It is instead at the beck and call of the moneyed elite, no matter the political persuasion.

People are finally allowing themselves to see that it simply does not matter who is setting in the White House or the halls of Congress. The results are the same: loss of our cherished, constitutionally guaranteed rights.

As a result of this mass awakening thousands of grassroots organizations are spring up across the nation. According to a recent article in The Nation, there are more than 5,000 to date. Please go here for an accounting, story and interview:
This Is the Resistance: More Than 5,000 Grassroots Groups Have Sprung Up Since Trump Was Elected, Start Making Sense and Jon Wiener, The Nation, 9 Mar 2017.

My guess is that Americans are not disengaging. Rather, we are just starting to engage. We are finally saying to the R and D politicians: Stop Messin' with My Lifestyle!!

Thinking about starting your own group or joining one? Please consider one I helped start: The Movement, Legacy Grandkids. www.legacygrandkids.info

Here is the link to Indivisible’s Guide (PDF)
If for some reason you can’t retrieve it, try this link backup.

“We live at a time in which totalitarian forms are with us again. Hopefully, rage and anger will move beyond condemnation and demonstrations and develop into a movement whose power will be on the side of justice not injustice, bridges not walls, dignity not disrespect and compassion not hate. Let’s hope it develops into a worldwide movement capable of dispelling Orwell’s nightmarish vision of the future in our own time. The dark shadow of authoritarianism may be spreading, but it can be stopped. And that prospect raises serious questions about what educators, artists, youth, intellectuals and others are going to do today to make sure that they do not succumb to the authoritarian forces circling American society and other parts of the globe, waiting for the resistance to stop and for the lights to go out. My friend, the late Howard Zinn rightly insisted that hope is the willingness “to hold out, even in times of pessimism, the possibility of surprise.” To add to this eloquent plea, I would say, collective opposition is no longer an option, it is a necessity.” - Dr. Henry Giroux, PhD, Professor of English and Cultural Studies and Global TV Network Chair in Communications, , Trump’s Authoritarianism: Rethinking Orwell’s ‘1984’ and Strategizing the Resistance, Henry Giroux, retrieved 8 Mar 2017, Bill Moyers & Co.

* This Is a Fight Against Fascism—Our Resistance Tactics Have to Change, Anis Shivani, AlterNet, 5 Mar 2017.
** The federal government shutdowns of 1995 and 1995–96 were the result of conflicts between Democratic President Bill Clinton and the Republican Congress over funding for Medicare, education, the environment, and public health in the 1996 federal budget. The government shut down after vetoed the spending bill the Republican Party-controlled Congress sent him. The federal government of the put government workers on furlough and suspended non-essential services from November 14 through November 19, 1995, and from December 16, 1995, to January 6, 1996, for a total of 27 days. The major players were President Clinton and Speaker of the U.S. House of Representatives Newt Gingrich.”
federal government shutdowns of 1995–1996, retrieved from Wikipedia, 9 Mar 2017.
https://en.wikipedia.org/wiki/United_States_federal_government_shutdowns_of_1995%E2%80%931996
***.Citizen's United vs. Federal Election Commission.
The USA PATRIOT Act
Military Commission Act
Section 1021 of the National Defense Authorization Act of 2012
# Business Plot (Attempted coup d'état of FDR) retrieved from Wikipedia, 9 Mar 2017. https://en.wikipedia.org/wiki/Business_Plot
## Please see, DownriverUSA.com:
Part 1. Lies Too Big to Fail, How We Lost Our Naïveté
Part 2.Lies Too Big to Fail, A Doppelganger USA is Running Amok Throughout Our World
Part 3. Lies Too Big to Fail, The Time of The Great Awakening: How We Can Resurrect Our Democracy