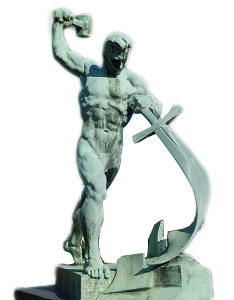 Years ago, when I was younger, I would pray for Peace.
Every New Year I silently resolved that killing and war would be no more.

I was a child then.
I believed that my resolving would bring Peace into being.

An old man now, I have observed that my resolving didn’t exactly pan out.
Peace has not arrived despite my annual effort to make it so.

This New Year I plan to add a few more words to my resolution:
In 2016 I resolve that killing and war will be no more and that all of us on planet Earth resolve it, too. Together we can make it so.


"And he shall judge among the nations, and shall rebuke many people: and they shall beat their swords into plowshares, and their spears into pruninghooks: nation shall not lift up sword against nation, neither shall they learn war any more." Isaiah 2:4


* The bronze sculpture "Let Us Beat Our Swords into Ploughshares," was created by Soviet artist Evgeny Vuchetich, and presented to the United Nations on 4 December 1959 by the Government of the USSR. The sculpture, depicting the figure of a man holding a hammer aloft in one hand and a sword in the other, which he is making into a ploughshare, is meant to symbolize man's desire to put an end to war, and to convert the means of destruction into creative tools for the benefit of mankind. It is located in the North Garden of the United Nations Headquarters.