3. Sen Sanders has led the fight against the XL pipeline, and for wind, sun, geothermal, and all renewable sources of energy. 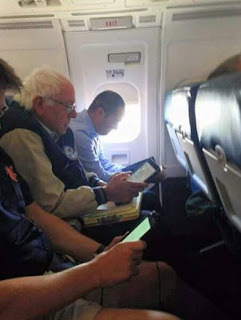 4. Sen Sanders opposed NAFTA, and has been a leader in the opposition to the TPP.

6. Sen Sanders understands the vital role that unions and institutions play in a more equal America, and fought for workers' rights.

8. Sen Sanders is a lifelong advocate for veterans, and a leader in health clinics and access to dental care and basic services.

10. Sen Sanders travels in the center seat on commercial airplanes, just like the rest of us "Joe Lunchbuckets".