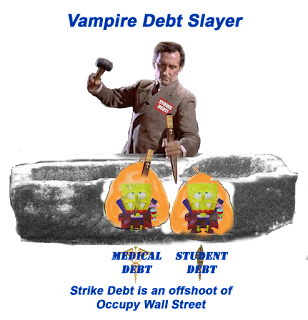 A friend’s casually tossed maligning comment led me to a research effort the other day.

His comment referred to the "Occupy Democrats" as illiterate.

Needless to say, while I immediately discounted his slur, the comment did cause me to wonder: What is going on with the Occupy movement?

I had not checked on them in a while. So, I decided to take a look.

To my surprise I discovered that the Occupy people, light years away from illiteracy, have launched multiple programs (1.) to help average, Joes and Janes – that is the 99.9% or Americans shed crippling vampire debt.

Since, at present, our predatory capitalistic society does not defend its citizens from the multiple blood-sucking, heinous, soulless elements which prey on the weakest, oldest and defenseless among us, it was a joyous moment to learn that the Occupy people have created Strike Debt (2).


62 percent of all bankruptcies are caused by a medical illness. (3.)1 in every 7 Americans is being pursued by a debt collector. (3.)An estimated 25 million adults will not take medicine as prescribed because they cannot afford it; others will avoid the doctor altogether. (4.)Student loan debt exceeds $1.2 trillion. (7.)

Further, I discovered, to what should be the everlasting delight of a few of my Republican friends, Strike Debt does the defending in an outstandingly capitalistic manner. Strike Debt uses our predatory capitalistic system for good rather than for sucking the very last drop of life blood out of its victims.

Now, that is absolutely fantastic!

Strike Debt, through the Rolling Jubilee Project, buys debt for pennies on the dollar – just like the debt collectors do. But instead of collecting it, Strike Debt abolishes it.

What an outstanding example of predatory capitalistic karma!

And, the story does not end there, by the way.

Strike Debt is credited as the source of at least one epiphany of sorts. 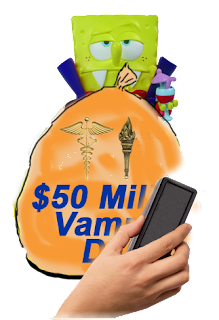 According to a recent Yes Magazine article, “… (Two) former debt collectors decided to ditch the Industry, buy up medical debt, and forgive it. Jerry Ashton and Craig Antico spent decades hounding debtors to pay their bills—until an offshoot of Occupy Wall Street inspired them to find a way to pay struggling people's debts.” (3.)