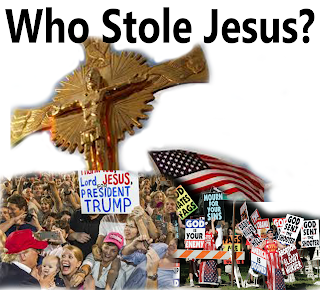 How do a few wealthy people manage to induce a large group of Christian Fundamentalists/Evangelists to do their bidding, e.g. retain their mega-wealth and attain political power, against the Fundamentalist’s self-interests, e.g. voter suppression?

Trying to understand how people are manipulated is a life-long study for me. Why do people need to believe that “others” are to blame for both real and imagined “sins” against them? What are the sources of those clearly unscrupulous, erroneous and often fatal beliefs? And how are they implanted in the brains of the manipulated people?

One age-old, proven method of manipulation is through religion.

God, Jesus and religion have historically served as facile tools for manipulators and this presidential election seems to have provided ample opportunity for practicing the tactic – people will accept manipulation if they believe it’s about a spiritual battle, “Good vs. Evil”.

Here’s how and who metastasized Christian Evangelicals into the Ultraconservative "Republican" Christian Right.

Bill Moyer’s discussion with Anne Nelson, author of Shadow Network: Media, Money, and the Secret Hub of the Radical Right.

"ANNE NELSON: That’s right. And from the beginning, in terms of their electoral tactics, it has been a matter of weaponizing certain churches and pastors and really exerting tremendous pressure on them to use churches as instruments of a radical right ideology. And then using similar tactics to suppress votes for Democrats, especially in key battleground states.”

Hear the interview (below).

For more about how religion has been used through the centuries...

The Battle for God and Fields of Blood: Religion and the History of Violence, Karen Armstrong.

“…But modernity has also been spectacularly violent, and so Armstrong goes on to show how and in what measure religions, in their relative maturity, came to absorb modern belligerence-and what hope there might be for peace among believers in our time.”

More about Christianity and the USA…

"For one thing, the complete opposition of Jesus and his followers to the imperialism of their day has been largely hidden to readers of the gospels.  The main reason for this hiddenness is that the authors of the gospels, seeking to present the message of Jesus so as to serve the needs of the Christian movement 40 or more years after the death of Jesus, sought to make it appear that Jesus’ message was directed against, and evoked opposition from, ‘the Jews,’ rather than the Roman Empire and those who collaborated with it….This failure of later Christians to understand the beginnings of their religion has contributed to what is arguably the most fateful reversal in history: Christianity, in origin probably the most explicitly anti-imperial religious movement ever, has since the fourth century provided the religious foundation for the growth of empires even more extensive than Rome’s….He [Jesus] was crucified by the Roman Empire – not by ‘the Jews’ – because he was perceived as a threat by Roman authorities.  Given the nature of Jesus’ life and his death, American Christians today should be anti-imperialistic, rather than basking in the pleasures of Empire, as did the Roman populace two thousand years ago – ignoring the terror and poverty brought to other provinces by Roman rule.“

More about the big data manipulators…

“Armed with their misleading data, these men have influenced and shaped laws making it harder to vote.”