It's About Jobs... New Economy Jobs

Mayor Julian Castro delievered a tremendous keynote speech at the recent DNC. He is also right on target on jobs for San Antonio, too. Under his predecessor, San Antonio launched Mission Verde, modeled upon successful sustainable energy programs already underway in Europe. Mission Verde is San Antonio's unique blend of the essential elements - investment, education, training, power companies, big corporations, neighborhoods, small businesses, local government and residents - all actively involved. It is the new economy based upon sustainable energy. It is working now. Other U.S. cities are also launching their versions of Mission Verde, as well. 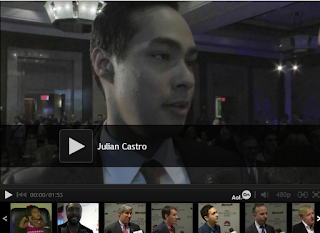 HuffPost video. Interview with Mayor Castro following the Huffington Post-sponsored "Opportunity: What Is Working" jobs panel Wednesday, 5 Sept 2012, at the DNC. Click image above to see video or go to: http://www.huffingtonpost.com/2012/09/07/julian-castro-dnc-jobs-panel_n_1865684.html
Posted by Ron Baker at 4:49:00 AM

I've been exploring for a bit for any high quality articles or blog posts on this sort of space . Exploring in Yahoo I ultimately stumbled upon this site. Reading this info So i'm satisfied to convey that I've a very just right uncanny feeling I found out exactly what I needed. I most without a doubt will make sure to do not put out of your mind this web site and give it a look regularly.

Excellent! I am very pleased you like the site!